Entrepreneurs looking for funding in Canada have access to a large number of government programs that can support many of the costs associated with running a business: from R&D salaries and subcontractor costs to export-related expenses like market research and advertising to name only a few.

Despite the variety of programs in existence—whether they be tax credits, grants, low-interest government loans or other—many end up having overlapping eligible costs. Meanwhile, “double-dipping”—the practice of covering the same expense twice with two or more programs, under certain conditions and scenarios—is not allowed, for obvious reasons.

In fact, governments often put out multiple grants and tax credits intentionally focused on the same expenditures. Therefore, the number of programs available explodes. However, the expenses that can be covered are finite and to what extent they can be funded is generally capped at a certain percentage. This creates two problems:

1) The government is inefficiently and independently managing applications, claims, and audits for two or more programs that could be just one since they essentially cover all the same expenses.

2) Entrepreneurs need to apply for several programs rather than one. They try to maximize government funding but often do so without realizing that there are restrictions on the amount of funding a project or an expense can receive. This often ends up being less than the combined maximum offered by the programs the entrepreneur applied to, and the programs essentially “cannibalize” each other.

Over the last year, we have seen the second issue reach new heights as several—albeit very important—COVID-19 support programs, like the Canada Emergency Wage Subsidy (CEWS), became available to businesses. Since both the CEWS and the CRA’s Scientific Research & Experimental Development tax credit program (SR&ED) fund employee salaries, businesses claiming SR&ED in 2020 that benefited from the CEWS see a layer of complexity added to their SR&ED claim—they essentially need to remove their CEWS funding from their eligible expenditures for SR&ED when calculating their tax credit.

This process is further complicated by the changing funding rates of the CEWS—a subsidy that offered varying rates of financial support depending on the calculated revenue loss—as well as the SR&ED’s eligible activities and time tracking requirements. The CEWS / SR&ED cannibalization scenario was previously documented here, but this problem is not exclusive to emergency COVID-19 support.

Here is an example to illustrate the grant “cannibalization rate” concept more broadly. Take an imaginary company headquartered in Quebec with annual salary expenditures of $50,000. They develop innovative products and are eligible for the SR&ED tax credit. They find a grant to cover 50% of their payroll expenses for the year. Should they go for that grant?

The quick, obvious answer might seem to be “yes”. If they apply to the grant program and are accepted, they will ultimately receive more money from the government to cover the year’s salary expenses. But is that extra money worth it? When we break it down further, we quickly find that it might not be as advantageous as it first appears. This fictional company would benefit from running the following scenarios before making a final decision: 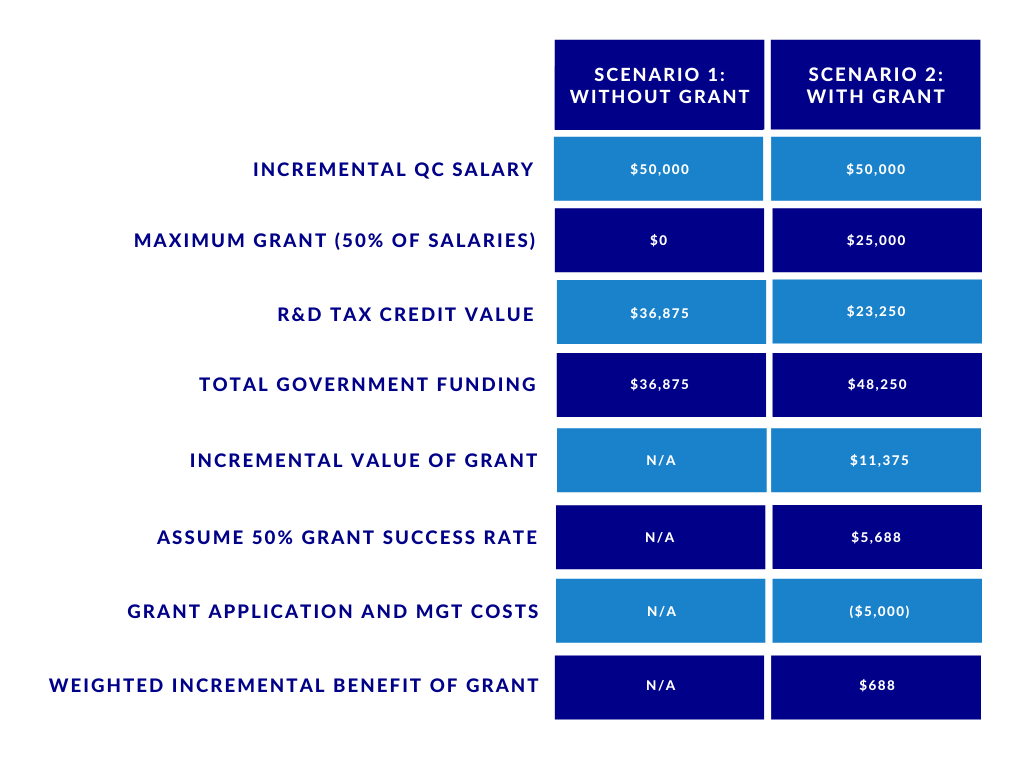 Note that in this example, we assume that the company is a Canadian Controlled Private Corporation (CCPC) where the incremental expenditure is above the minimum QC threshold. We can see that 54% of the grant ($13,625) is cannibalized before you even get to the cost of applying for or managing the grant, or the expected success rate. This leaves our example company with an $11,375 possible grant that is further reduced to $5,688 when we take typical success rates into consideration.

The simulation above is also interesting because we notice that the cost of applying for, managing, monitoring, and—heaven forbid—supporting the audit for, a grant is important to understand as well. It is estimated to cost $5,000 in the example.

When we add everything up, this fictional company only has a weighted incremental benefit of $688 if they go for the grant. However, the grant also may also provide this business with greater cash flow as it is received before the SR&ED tax credit. The value it can bring is not exclusively in terms of the total contribution received from the government; the timing is also important when considering this added cash flow.

There are some excellent government grants that we use regularly for our business, but make sure you are informed before devoting time, energy, and money to applications that may not yield the return on investment you hoped for.

If you have more questions about grant stacking and cannibalization rates or want to find out how R&D Partners can help you maximize your government funding and simplify your life, please contact Mike Lee at [email protected] 1-800-500-7733, ext 110.